If you have seen this image populate on your news feeds and twitter handle, we are sure you know what we’re talking about. There’s been an upraise of memes from Apple’s event and the launch of its new series of products. While some would say there is not much of a difference between the iPhone 12 and 13, the iPhone 13 sure has its value for money. And as we go on and share the upgrades on the iPad, the Apple watch and the iPhone 13 series. You can make an informed decision about the new product line of Apple. With that said. let ‘s get started.

The event kicked off with the introduction of the new iPad powered by a powerful A13 Bionic Chip providing faster performance than its predecessor and other android tablets available in the market currently. The iPad boasts of a greater responsive interface that allows you to transform the iPad from using it for messaging, web-browsing, playing immersive games and using advanced apps like Adobe Fresco for a realistic digital painting experience. The neural engine of A13 allows Machine Learning capabilities like Live Texting even faster, the upgraded signal processor of A13 also allows you to take high quality photos using the rear camera. Some of the key highlights of the upgrades include a 12MP ultra wide front camera that allows you to enjoy high quality video conferencing, Center Stage is again a feature that complements the 12MP front camera allowing users to enjoy an engaging experience as the features allows your focus on the subject when they move both on Landscape and Portrait mode. 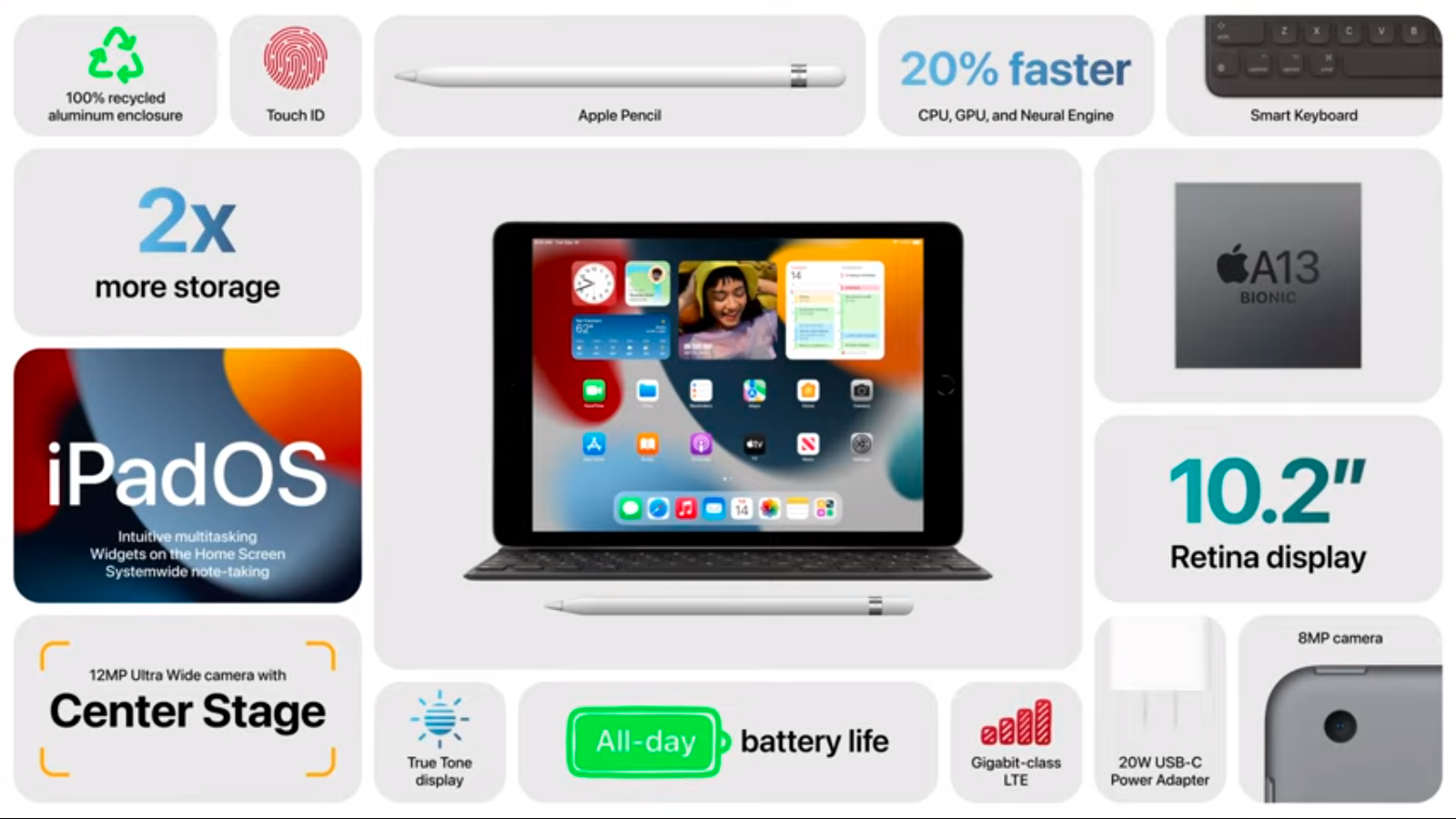 The Apple iPad Mini 6 features an all screen design and rounded corners. It boasts of a Liquid Retina Display with a whopping 8.3inch edge-to-edge display, this meant that the touch ID had to reposition to the top similar to the iPad Air. The new and improved iPad Mini has seen a 40% increase in faster CPU performance and an astonishing 80% increase in the GPU performance. This ensures that you have a rich experience on apps that require high graphics processing or immersive gaming online experience. The upgraded Neural engine provides twice the speed of the Machine Learning performance. The introduction of the USB-C port allows data transfer of upto 10 times faster than its predecessor. The enablement of 5G compatibility provides users with unmatched connectivity and faster download speeds. The camera and audio systems on the iPad mini have also been updated with a 12MP larger aperture rear camera to capture sharper photos, and a 12MP ultra wide front camera with the Center Stage feature. The audio system has been upgraded to a stereo system in the landscape mode to listen to your favorite music on the iPad. In terms of the accessories, the Apple Pencil makes a great addition to the iPad mini, transforming it into your mini sketchbook. 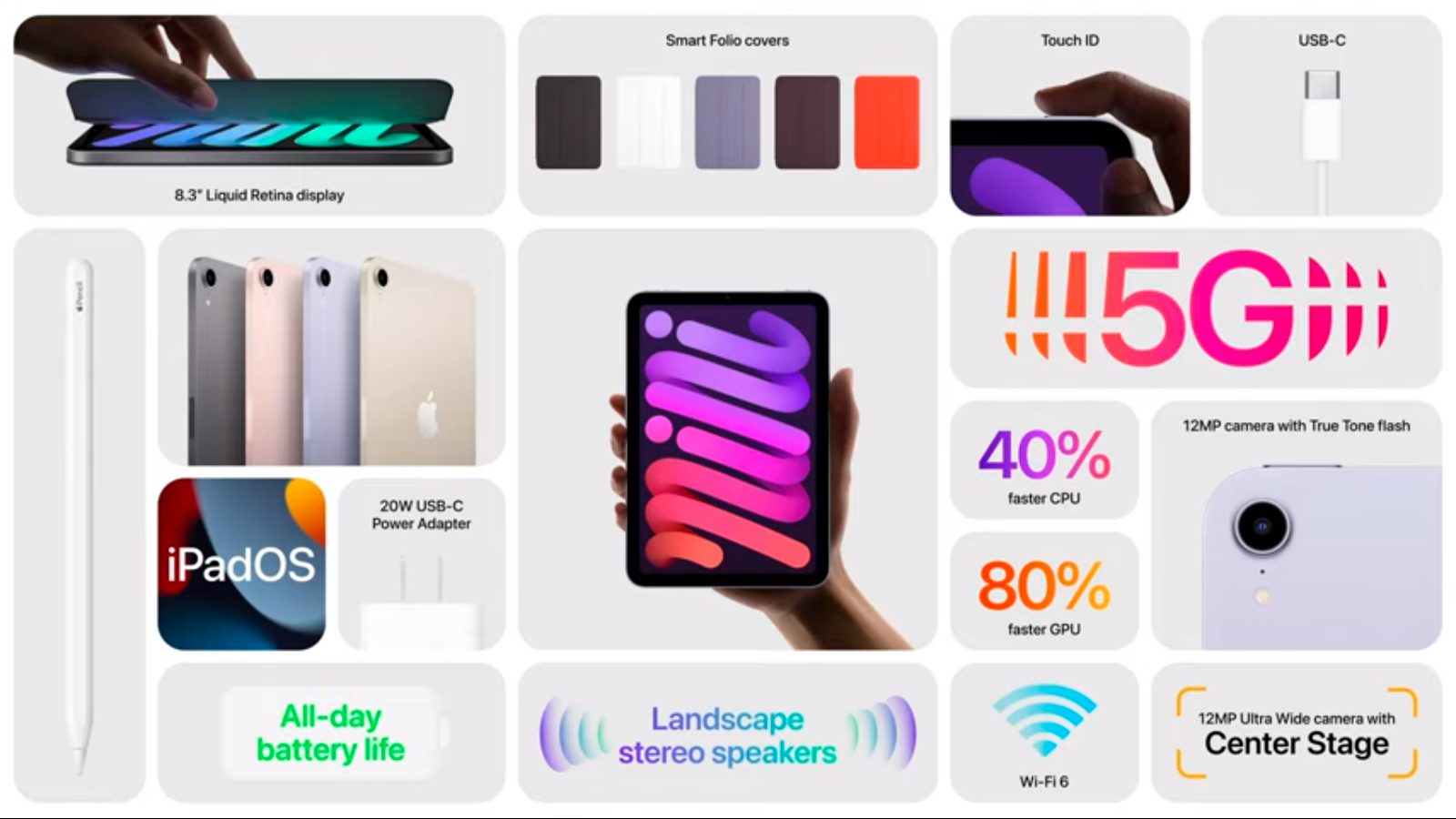 Apple is intentional about caring for the environment, it has ensured that its iPad and iPad Mini features a 100% recycled aluminum enclosure. This goes a long way towards reducing the carbon footprint and environmental impact. 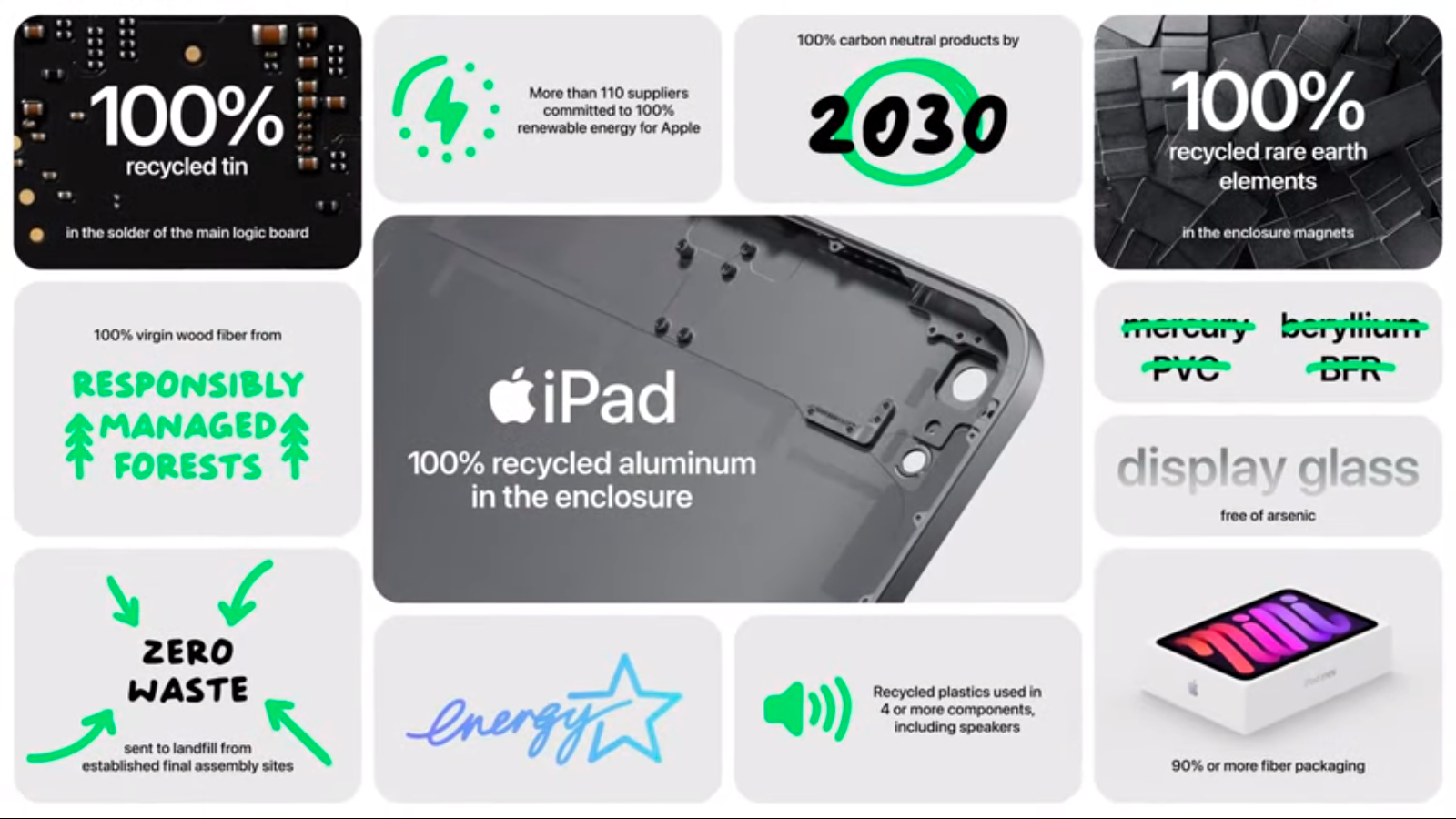 The All new Apple Watch Series 7 has been given the title of the most durable Apple watch ever. It boasts of a crack resistant front crystal and is durable to use in all conditions. It has 20% more screen area than series 6 and 50% more screen area than series 3, the watch has a 40% thinner border than its predecessor. The shape of the watch and the case has been redesigned to refract light on its edges and make it seamlessly integrate with the watch casing. The User Interface of the watch has also been improved for easier navigation and interaction with the device, the screen is optimized to fit more text for you to read more without scrolling. You can even input text using a full keyboard by tapping on the screen or slide the word using QuickPath, the ML engine to predict words. The series 7 also comes with 2 new watch faces specifically designed for series 7 with additional info on the modular face. The watch is a great companion to monitor your fitness on Apple Fitness+. 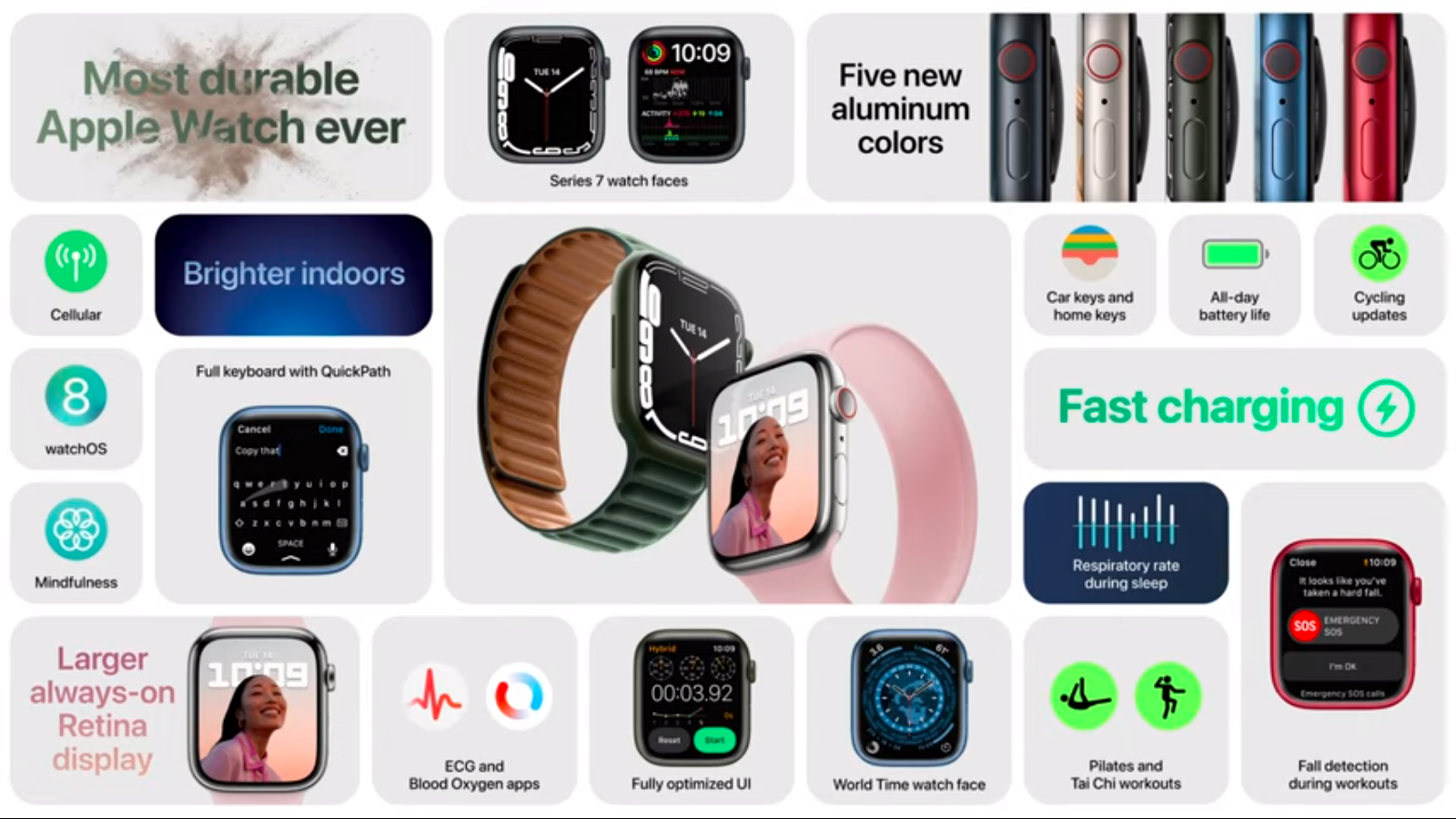 The iPhone 13 retains its sleek and elegant look, but has a few modifications to the rear cameras being placed diagonally. The iPhone 13 has surpassed the updates we shared about the iPhone 12 last year. The front Trudepth camera of the iPhone 13 has been reorganized to provide more display space. The iPhone 13 series boasts of a bigger battery than its predecessor extending its battery life to 2.5hours longer than the iPhone 12. The A15 bionic chip makes the iPhone 13 the fastest iPhone ever made, the 6 Core CPU will enable users to smoothly use the phone with demanding workload and efficiency. Apple claims that the iPhone 13’s processor is 50 times faster than any other smartphone out there in the market. The under the hood upgrades makes the graphics intensive tasks on iPhone 13 a cakewalk with its 4 core GPU. The phone’s capability to manage the machine learning tasks has also received an upgrade with the upgrade of the 16-core Neural Engine. The iPhone 13 is 5G ready and Apple is collaborating with many carriers to enable 5G for more call clarity and coverage in more places and regions. The high speed bandwidth allows you to binge watch your favorite shows on the go and stream your favorite music too. The starting range of storage has doubled from the iPhone 12, now the iPhone 13 comes with 128, 256 and 512 GB storage capacities, the cost of the iPhone 13 starts at $699 and is a great value for money. 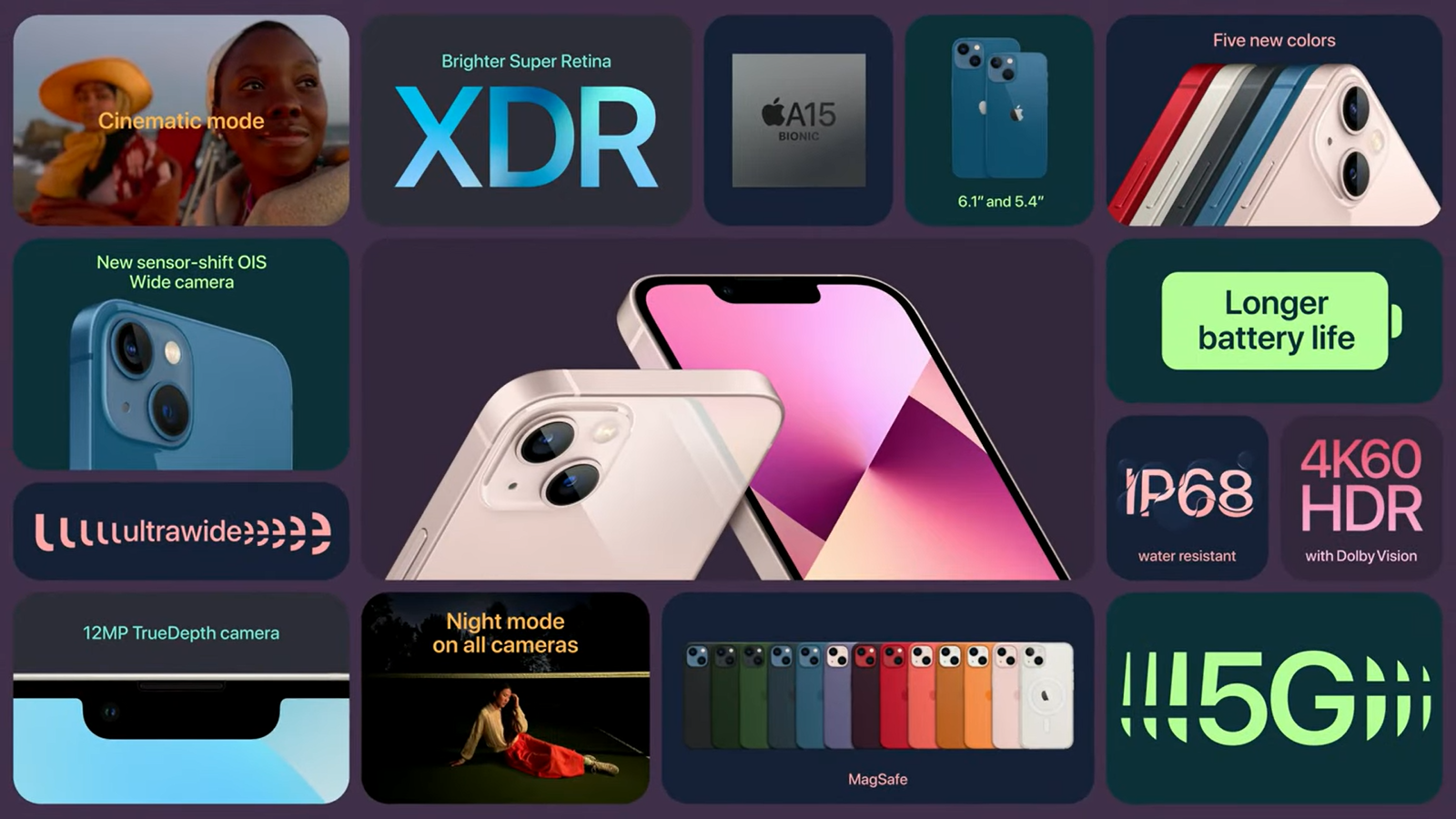 The upgrades on the camera have received some phenomenal changes, the image stabilization sensor from the iPhone 12 Max Pro has been included in the iPhone 13’s dual camera system. The aperture size of the lens has been increased to gather more light and take stunning shots in both bright and low light scenarios. The phone’s video capabilities have been improved drastically. The Cinematic Mode on the iPhone 13 has included the rack focus technique for filmmaking enthusiasts. You can now tell great engaging stories by simply recording a video on the iPhone 13 using the Cinematic mode. The phone records in Dolby Vision HDR and allows you to change the focus and keep it locked on a particular subject even as they move, this makes it all the more easy for filmmakers to use change focus techniques to create beautiful high quality cinema grade films. 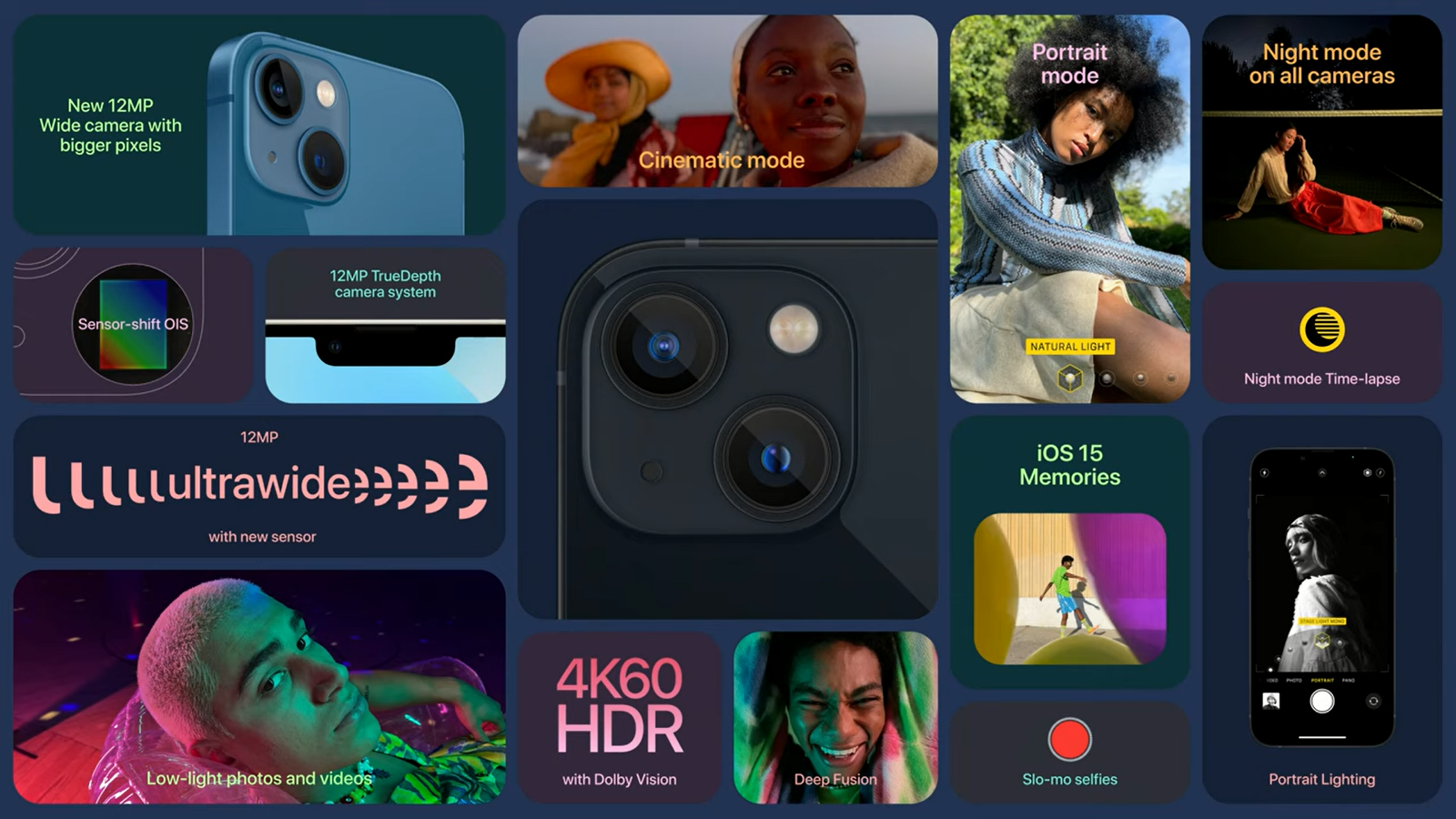 The Pro series of the iPhone 13 is power packed with all the features of the iPhone 13 and additional features like ProMotion. The ProMotion feature allows the refresh rate of the display to extend from the lowest 10Hz to the highest 120Hz. The dynamic response rate allows users to view content with high resolution and frame rate when needed. The adaptive frame rate is a favorite among gaming enthusiasts and artists who require a high responsive design to game and create digital art and visual high resolution graphics without a lag. The camera upgrades on the Pro versions are out of the world. The iPhone 13 Pro versions come with the Telephoto, Ultra wide and a wide camera lens that are great to capture high quality low light images on a tripod and wide angle shots. The 3x optical zoom allows you to capture stunning photos up close or out wide without compromising on the quality of image. Macro photography enables you to focus on details at close range, recording videos using the Macro photographic capabilities and the Cinematic Mode makes the iPhone 13 Pro and Pro Max the best handy tool to record films. The Pro series of the iPhone 13 comes with storage options of 128, 256, 512GB and for the first time a whopping 1TB storage option. The cost of the Pro series starts at an affordable price of $999 and is available for pre orders from the 24th of September. 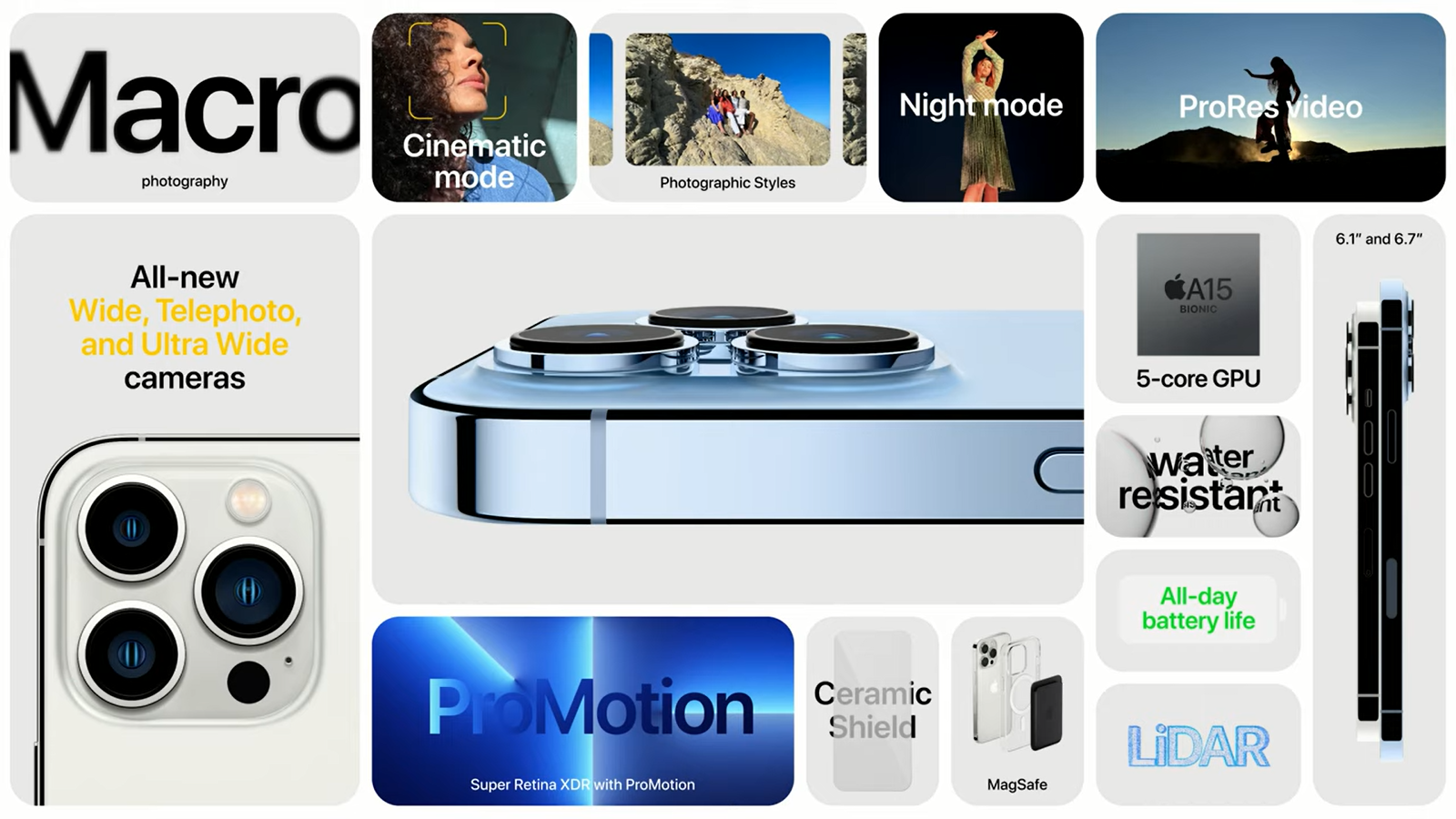 Apple is constantly focused on making the consumer experience on the devices the best ever possible. We are sure that these upgrades to the devices will not only bring a delightful user experience but also push the boundaries of developers to create elegant apps that complement the user experience and device capabilities on the new range of the iPhone, iPad and Apple watch.