After relentlessly working for days and nights, we are proud to have successfully launched pCloudy 5.0. And it is special and very close to our hearts!

But, as they say ‘winning is only half a thing; having fun is the other half. We pCloudians believe in this philosophy and so after hard work, it was time for us to have fun.

We place a high value on balancing work and personal life, and hence we try to host at least one family outing every year. It gives us all a chance to let loose, have fun, and meet the people most important to our teammates! This year we decided to visit an eco – resort near Bangalore – Our Native village. Two of our colleagues, Suraj and Pradeep took the initiative of making all the arrangements.

It was a bright Saturday morning and everyone boarded the bus from office at around 10 on 21st April. Our excitement knew no bounds and after greeting each other we started our day with playing ‘Dumb charades’ in the bus. We made two teams and gave the weirdest movie names to each other which was funny to act and acting on it in the moving bus made it even funnier. Nobody realized that we had already covered the 2 hours distance and were about to reach our destination.

We reached the eco-village resort’s gate and the adventure started to unfold. ‘No entry’ was written in bold on the gate and we couldn’t see even a single human being around. Some people started to share ghost and thriller stories there. Then, the bus driver suddenly spotted a lean and short-heighted gatekeeper sitting at the corner-most place. He opened the gate, took our details and let us enter. Now the most adventurous part – there was no pitched road, and you could only find farms on both sides till the point your eyes could see. No man, nothing. Each one of us started to wonder if we have reached the right destination or is the bus hijacked and what not. After moving for around 2-3 kms, we finally saw a poster directing towards the resort. We all had a sigh of relief and the people who were most scared acted as if they knew that this is going to come.

We all entered the resort and were welcomed with garlands. We found the resort to be truly a replica of an Indian village. We could see swings made of tires, bullock carts, rabbits, chickens, turkeys all around us. After settling down, we rushed to have lunch which was well prepared with a good range of buffet.

We made different groups and played 20-20 cricket, badminton, basketball, shooting, snakes & ladders, UNO, chess; you name it and we played. Kids spent most of their time on slides, trampoline, swings or running after chicks or rabbits.

The real fun began in the evening after we had our snacks. The list of team building activities started with the ice-breaker activity – Fire in the mountain, followed by Big fish-small fish. It was a wonderful game, where each one of us had to act the opposite of what we say. Reflex action can be fatal sometimes.

Next in line were activities where we were asked to form 2 teams and named our teams as Iron man and Spiderman with Hansil and Suraj as the team captains. The anchor used to call out to collect a particular number of some random items and the teams should help their respective captains collect those number of items in the shortest time. This game actually made some of our male team mates take off their t-shirts and do a catwalk.

Another group activity was passing on the hoola-hoop to your team members holding each other’s hands and without touching the ring. The last activity was on the team selecting a song which they had to sing at their highest pitch and keep on dancing on the songs played until it stops with full zeal. Although each one of us got breathless but in order to make our team win, we played till the end. And guess what! The spiderman won, I am so excited because I was in that team. 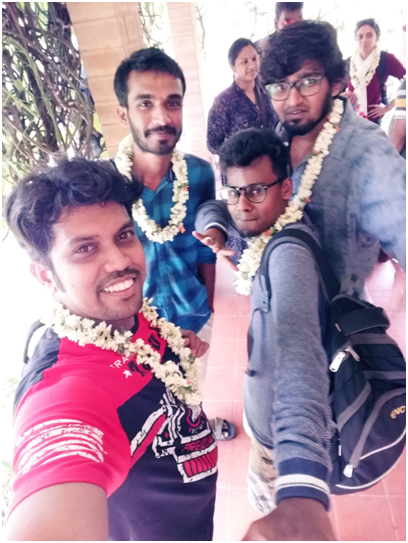 A grand welcome can take away all your worries. Here are a few giving candid pose. 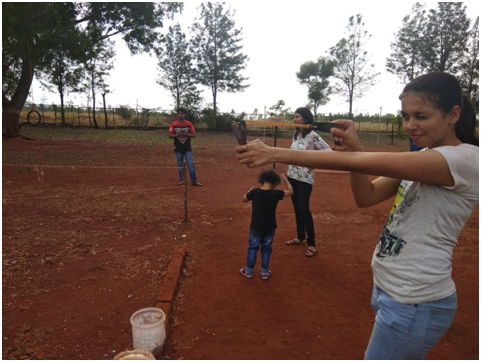 You are “busted”. A mind boggling game to check your reflex action.

Throw the ball and hit the target! Everyone’s favourite game teaches us tactics! 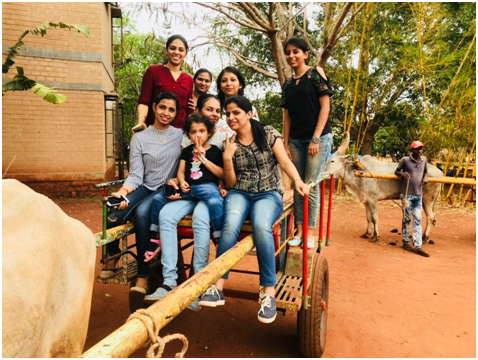 Being photogenic while giving cheesy pose has its own relevance. A quick snap with pCloudy team and their closed ones!