How to Analyze Data to Predict Your Optimum Device & Test Coverage?

Imagine that you developed a mobile app but it does not work properly on some devices as the device fragmentation is getting more complex with time. This will be a tester's nightmare as the users will drop the ratings of the app which will lead to a decrease in the downloads.

Teams need to consider the device usage patterns across geographies to test their apps. This will lead to smooth app functionality across all digital channels. This is the need of the hour.

We can optimize the device and test coverage by using data analytics in app testing instead of relying on guesswork. You can also watch the webinar video where we have covered this topic extensively.

Before we move on, let’s understand some of the terms that will be used in this article.

The growing complexities of Device Fragmentation

It is not feasible to run a test on all the devices as the permutations will be huge. There are 16 device display categories, 20 different resolutions, 15 android versions, 400 android device manufacturers and multiple cellular networks. I am sure you will be able to relate to it. So, there are two traditional ways to create an optimum device matrix. First is based on market penetration and the second is based on device diversity. Here is a brief overview of both the ways we have been using on our convenience.

To get a better understanding of the device fragmentation based on operating system, we need to understand the basics of Android architecture. So let's get on with it.

Android is an open source operating system based on the Linux kernel created for an array of devices. Android has a five-layer architecture as mentioned below: 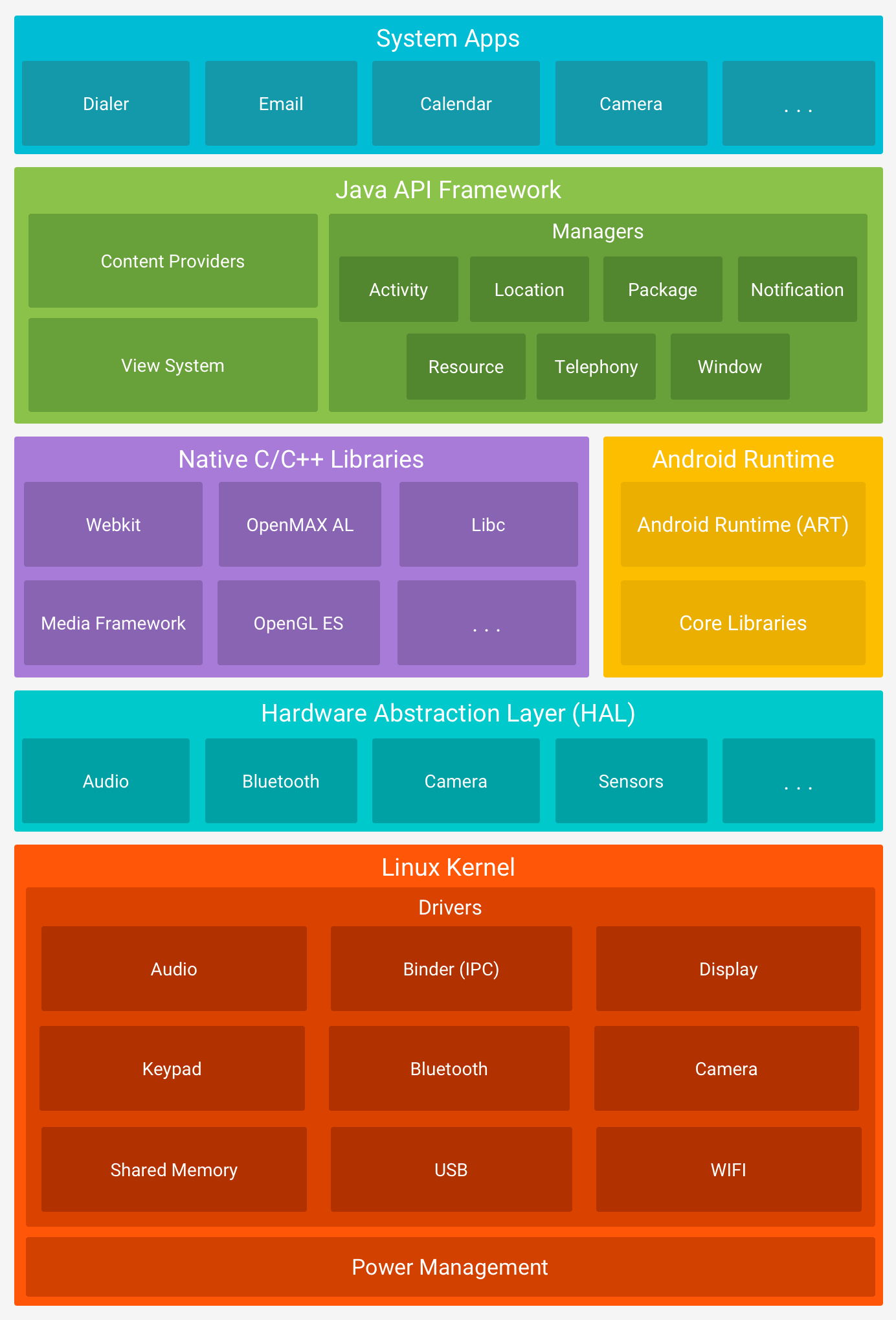 In some cases, mobile device manufacturers make customizations in the Android architecture to enhance the user experience. That is done by using custom ROM.

One of the major reasons for bugs is the fast evolving Android platform. If you have built an application then you need to ensure that the app works on various API levels that are still used widely. Every new API level launch comes with changes in the guidelines and this raises the chances of app failure. Many brands like Xiaomi, One Plus, Huawei etc, keep releasing new phones and as an update, they customize the ROM. All their devices have diverse specifications like screen size, RAM, processor, camera etc. In the table below you will see the layers of android app stack and how they are divided into two sections the higher level and the lower level.

OEMs customizations and its impact

According to Statcounter, this year's data shows that Samsung and Apple have almost 32% and 23% of the market share in mobile sales worldwide. Chinese companies like Xiaomi, Huawei, and Oppo has around 20% market share combined. There are several local OEM's in many countries adding to the diversity in mobile devices. Many OEM uses custom ROMs to provide added features but custom ROMs comes with some duplicate apps.

Most of the custom ROMs like MIUI and Oxygen OS has its own calendar app, music app, and their own browser. UI skins are a significant source of fragmentation in OEMs. This means that we need to consider custom ROMs while creating a strategy for device coverage.

How Android evolved and its impact

Android has released many versions and API levels since its inception. API level is a unique identification code which is given to every framework API revision offered by a version of Android. For e.g., Android 8.0 is API level 26, Android 8.1 is API level 27 and the next version Android 9.0 is API level 28. Developers can specify the compile SDK version, target SDK version and a minimum SDK version in the manifest file of an app as it tells you which app is supported by a particular device.

What we have seen so far

We have observed a trend in the occurrence of compatibility issues and their root causes. We can divide the compatibility issues into two groups, device specific and non-device specific. In device specific issues the first and the most common root cause is problematic driver implementation. For e.g., there was an issue in some devices related to the proximity sensor. If you bring the device near your year the touch screen should get disabled but that didn't happen in those devices. The second root cause is OS customization. Some devices brought the multi-window support feature where you can open multiple application in a single screen. That
feature created a lot of bugs in most of the applications. The third issue is peculiar hardware composition.

The majority of compatibility issues falls under non-device specific issues. Most common of these are due to changes in the Android platform APIs. In Android 8.0 API level 26, there was an internationalization failure. That means if your app is built to work with different languages than it will show a bug. The second root cause in non-device specific issues is the original Android system bug. These issues are resolved quickly as soon as these bugs are reported to Google it releases a patch to fix it.

Android regularly publishes release notes on its forums which talks about the behavior changes for all apps. These changes include power management, security behavior changes, Android test changes etc. They also inform about the behavior changes for new apps targeting the particular API level. This information will help you to predict and plan your test cases. You can select the devices for which you need to plan your testing and the functionalities that you need to focus on where there are maximum chances of failure.

We have created a cheat code by analyzing the data that you can refer to perform testing on Android 8.0 and Android 9.0.
Click on this link to download the cheatcode

It's high time that we say testing is just not enough. It's time to predict. Data has a lot to say. You can utilize it to help you in various ways. When predicted accurately, it can take your testing to another level.