With an increasing demand for test automation services, organizations are looking at investing in the best test automation tools for their business. Selenium is on the top of their list because of its numerous advantages. Research has predicted the growth of the Global Automation testing market to reach US$ 109.69 billion by 2025, which means that software testing is evolving and growing fast. The impact of Selenium Testing is such that it has turned out to be a game changer in the Software Testing world. Test automation has become more efficient than ever before, the high levels of accuracy that is achieved is saving a lot of time for the QA team as well. Selenium has contributed a lot in bringing this exponential change in the testing space and continuous development and delivery process.

Well, Selenium does not need any introduction. It is quite popular in the software testing industry and the most liked web-based software test automation tool that has set its benchmark for a long time now. Here is a list of a few of the features of Selenium mentioned below:

To answer these questions, let us dig deeper.

The software market is ever-evolving, and so is software testing. Testers around the globe understand and express the challenges of testing softwares manually which led to the introduction of Test Automation. Test automation has revolutionized the way software testing is performed. The open-source tools of software testing have given the testers more freedom to innovate and bring the best out of the testing skill. The concepts of Agile and CI/CD have contributed to this evolution.

Selenium testing has changed the face of automation for many developers and testing teams across the globe. What Selenium Testing framework primarily does is – it tests the web applications and validates if it qualifies to reach the production environment and move to the market-ready stage. Although a glimpse of what Selenium can do has already been shared above, we might also want to discuss a bit more about the impact of Selenium Testing on the future of the software testing world.

It is a cost-effective software testing method that cuts down a lot of testing costs. This is also why most beginners prefer to start their journey with Selenium

Since it is an open-source tool, anybody can download it at no cost. Any organization, from small startups to large enterprises have an open access to the tool anytime, anywhere.

It is highly compatible with almost all the browsers like Firefox, Chrome, IE, Opera, and Safari. Selenium can effectively test the applications across browsers to check the cross-browser compatibility of the web apps. Developers enjoy this feature the most because it lets them develop the code only once before cross-browser testing. One of the features of Selenium Testing is that it allows the interchanging of languages as and when needed. The API can be selected based on the programming language, preferably Java, Ruby, Pearl, .Net, Python, PHP, and C#.

– JUnit, TestNG based on JAVA

-NUnit based on C#

-PHPUnit based on PHP

-RSpec and Test::Unit –Ruby based

-WebDriver, NightwatchJS, WebdriverIO is based on JavaScript.

Selenium IDE allows recording, debugging, and editing the tests. It records the actions to be tested. It automatically saves the recorded test cases, which enables retrieving tests for future use, an easy process.

Selenium has a strong growing community which is also an official user group. You can find solutions to all your testing issues, tool tips, etc, here. The community even promotes high-quality information documents to make the most of the automation testing tool. The web community provides enough information and resources that you need not worry about additional training to understand the problem.

Another useful feature of Selenium testing is that it can scale up to complex testing like production monitoring and load testing. Code flexibility and ease of updating the code are what the software team enjoys the most. TDD eases software developer’s efforts as the need to write the new code only arises when there is a failed automated test.

Selenium might be the best automation testing tool available today. However, every popular tool has its sets of advantages and disadvantages. Let’s look at some of these disadvantages.

But, there still is a long way to go!

AI and ML based automation testing certainly looks better than Selenium unless the latter integrates the former and evolves with time to transform the future of software Testing. There may be cases where organizations need both for good reasons and both co-exist. But, nobody knows what the future holds for us, but the landscape surely looks promising and exciting.

What is the future of Selenium testing? Although Software testing is an evolving space, testers across the world still encounter many challenges. To overcome these challenges, the stakeholders look for promising test automation tools that suit their needs. Most of them look for cost-effective automation tools that offer maximum benefits. It is a huge responsibility to select the right automation tool because sometimes, even the best tool might not suit your organization’s needs. It is more of a strategic decision rather than any one-time decision. Selenium fits best in this kind of situation. In addition to a list of benefits, features like being open-source and cost-effective have created a special place among the testers because of the ease of access that it offers. Selenium testing ensures that the quality of the application is maintained and that only the best version goes out in the market. Other range of benefits like compatibility, and speed are attracting more and more global enterprises to shift to Selenium in the best interest of their business. Machine learning and Artificial Intelligence, if integrated with Selenium, will bring a significant improvement in the current automation scenario. AI and ML integration in the existing Selenium Automation will impact Selenium testing for the better resulting in a progressive future of the Software Industry.

While there is a substantial increment in the mobile apps market share, web apps are still prevalent with a significant user base. Enterprises are focusing on the quality at speed when it comes to web apps, before deployment. This is where testing has an important role to play. UI testing is still mostly a manual […] 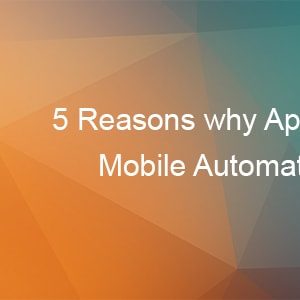 Why Appium is The Best?   With Appium creating a buzz in enterprise mobility, mobility teams are still finding ways to successfully automate tests leveraging Appium. Appium being an open source tool is the perfect choice for automating native, mobile web and hybrid applications on their respective platforms. Let us now see the major factors […]