Why Appium is The Best?

With Appium creating a buzz in enterprise mobility, mobility teams are still finding ways to successfully automate tests leveraging Appium. Appium being an open source tool is the perfect choice for automating native, mobile web and hybrid applications on their respective platforms.

Let us now see the major factors behind Appium being the best choice for mobile automation tool:

4. Cross-platform test automation: Having the capabilities to test on both Android and iOS devices makes it the best cross-platform mobile app test automation tool. In order to interact with Android and iOS with Selenium WebDriver, Appium uses the JSON wire protocol. Appium makes use of the libraries provided by Apple with the help of an application called Instruments to automate iOS apps. In newer versions of iOS after v9.3, the Instruments api has been deprecated and now use XCUITest framework.
The method is similar in Android also where Appium proxies the automation command to the UIAutomator test case running on the device. Android has a native UI automation framework called UIAutomator which supports running JUnit test cases from the command line directly into the device.

5. Open Source: Being an open source testing framework is one of the biggest advantages of Appium as it supports Simulators, Emulators, real devices, and of course, native, hybrid and web application testing of iOS and Android. Appium having a large and thriving open community makes it easier for new automation engineers to clarify their doubts.

You can instigate test scripts created from Appium libraries locally, on a session reserved by the Cloud, for any iOS or Android device. Appium integrates with continuous integration servers to ensure better results and drives GUI-related widgets and controls, allowing the same scripts to run for different software versions of various apps. Appium can automate native, web and hybrid mobile apps, and you can test on a real device, a simulator, or an emulator. It also supports Safari on iOS and Chrome Mozilla or any built-in ‘Browser’ app on Android.

Here is tabular representation for you to understand Appium’s compatibility with different features and tools. 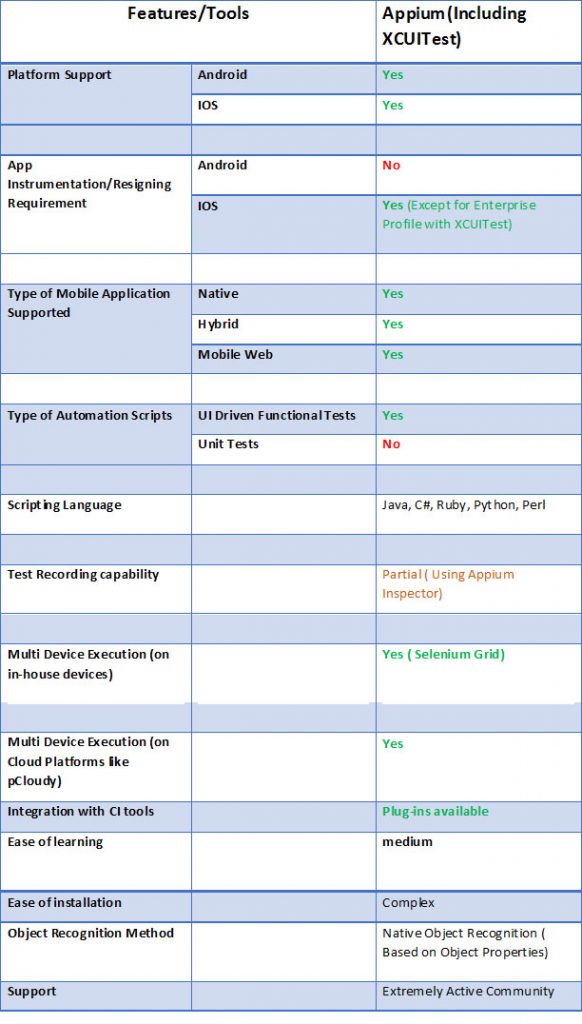 Teams who are getting started with Automation or are considering Appium as an option, must explore an alternative to go for a mobile device cloud with built-in Appium.

At pCloudy, we are dedicated towards helping enterprise mobility teams make the process of mobile development, testing and device sharing seamless and faster by integrating it with cutting edge tools like Appium. Read this blog to get a comprehensive analysis sheet to quickly choose which open-source test automation tool will be right for your automation testing.

Sign up on pCloudy and automate your tests using best open source automation tool for faster and better delivery of apps.

How To Install Appium On A Mac Machine

In the last blog in this series we learned how to start the Appium server and launch app from the code. In this blog we will understand how to setup Appium on a Mac machine. Pre-requisite • Mac Book • Xcode • Simulator or real device • Appium • Eclipse • Java The first step […]

In the previous blog, we informed about the basics of Appium and its architecture. Now let’s understand how to setup Appium. There are four steps required to setup Appium, they are enabling the Android device for test, test environment setup, Appium Configurations, Launch the app on the device.   Pre-requisites for Appium Mobile Testing   […]

[xyz-ihs snippet=”quickLinks-mobile-app-testing”] In the year 2020, there will be around 5.5 Billion mobile users which accounts for 70% of the world population. More mobile users mean more apps and more competition and to lead the competition we need to make sure that our app is flawless. If nearly half of the bugs in your mobile […]

Types of Testing Since there are many players in the mobile app market, the competition is endless. To beat the heat and to keep providing an enhanced mobile app experience to the users, the app needs to be constantly updated with the changes happening and for doing this, there are different types of testing techniques. […]