pCloudy is committed to delivering the best solutions in mobile app testing and therefore we come up with product updates at regular intervals. This time we are thrilled to announce the release of pCloudy 5.6 with exciting new features to make app testing simpler than ever. Our customers trust us because we believe in exceeding their expectations and add new useful features to enhance the platform’s capabilities. For those who are new to pCloudy, it is a cloud-based continuous testing platform designed to enrich your apps. In this new version of pCloudy, we have addressed the concerns of our users and added new features like Wildnet, Capability configurator, Object spy, and more. Let’s know more about all these features.

An application server is accessible only from within your lab and if you want to test your mobile application with that server, you are forced to work within that lab. If you move with the device in hand outside the lab, you will not have access to that server. How do you test such kind of setup using pCloudy? Because if you are using pCloudy, that means the devices are outside your network. The answer is Wildnet. 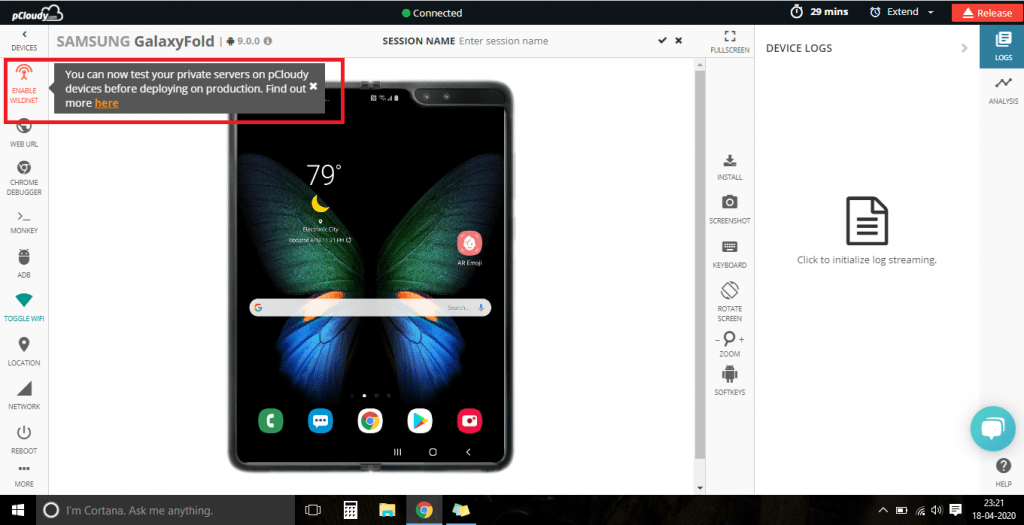 This feature enables our users to test private or internal servers on any Android or iOS devices present on pCloudy. For this, you just need to download the executables for OS (Mac, Linux, Windows) on your local machine, Then fetch the user name and API access key for your pCloudy account settings and use it in the terminal to build a link between a device in pCloudy and your internal staging server. To connect a booked device to your internal staging server, you need to click on the Wildnet icon as shown in the picture below.

While creating automation test cases you need the object names of the objects that are available in your application. For example, if your app is launched on a device and you want to click on a particular button, you have to mention the object name in the script to perform that action in the app. Earlier testers used to extract the object name using Appium desktop, but now they don’t need Appium desktop for that. pCloudy now has an inbuilt object spy through which you can run the inspector sessions directly on Android and iOS devices. One big advantage is that its bilateral view which makes it easy for users to click on any element on one side and view the details another side. Also, the generated code can be copied for future use. 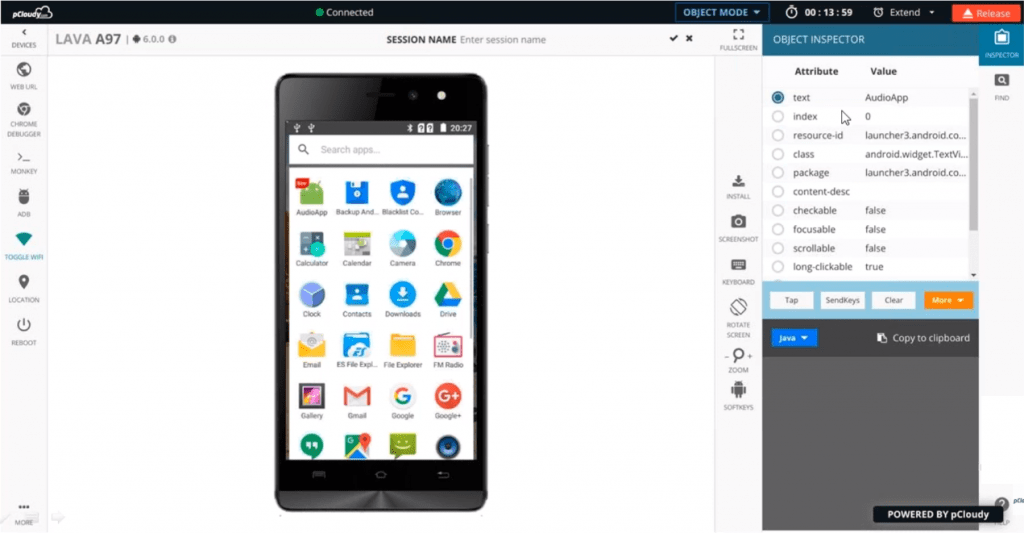 In the picture above you can see on the right side we have the object inspector where you will get all the attributes and values for any application. You can select any attribute and perform an action using the tap, send keys, clear and the more option. Following the action, an XPath will be generated which can be used in the automation script.

This feature will enable System-admins of our Private and On-Premises cloud to delete older reports based on pre-defined settings. To use this feature, system administrators will have to go to control settings in their pCloudy account and under Infrastructure Management there is an option for Data-Persistence. Whenever any user tests an app on any device in pCloudy, certain artifacts are generated in the form of test reports. Each report will have videos, logs, screenshots, and other elements. These artifacts take up a lot of space so now system admin can delete the older data using the data persistence feature. 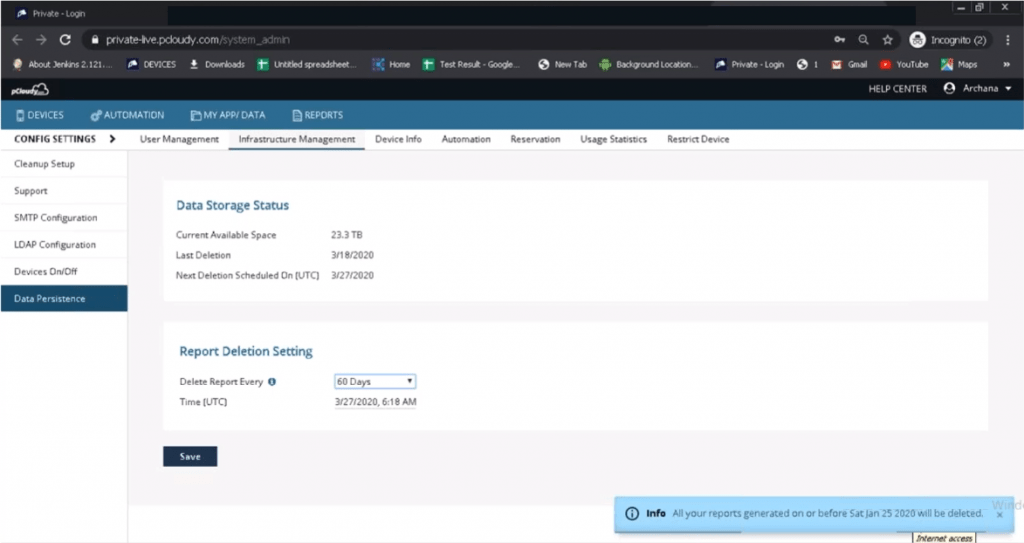 As shown in the pic, the system admin can select the date, time and the number of days for which the data has to be deleted. This will help in managing the limited space provided for every team account.

In an automation script, we have to include certain capabilities like device name, platform version, etc., to execute the test cases. But now you won’t have to gather the capabilities from different sources, capability configurator will generate the desired capabilities directly using certain filters.

As you can see in the pic, you just need to go to the Devices page in pCloudy and click on the Capabilities tab. Under the capabilities tab, you can choose the parameters like OS, Automation type, Device location, Device name, etc., and the capabilities generated can be copied and pasted directly into the Appium script.

iOS is a close operating system, and there are many restrictions for testing apps on Apple devices. In pCloudy 5.6, you will have two more functions on iOS devices; close app and lock/unlock the device. The close app function will enable pCloudy users to close any launched application on a connected iOS device using the soft button. The second function will allow any connected iOS device on pCloudy to be locked and unlocked. These two functions will enhance user interaction on iOS devices by saving time and effort. One more new update is that pCloudy now supports Appium 1.15.1 which is one of the latest stable versions of Appium. This will make it easier to perform test automation on iOS 13 devices in pCloudy.

The new features added to the platform will help our users to perform live testing on remote devices. Features like the latest Appium support and better user interaction on the iOS devices will empower our users to speed up automation. We are working on some new features, based on our customer feedback, which will be included in the next release. So stay connected for more updates.