pCloudy announces the launch of its device data center in Australia

It’s been a great year for us in terms of customer acquisition. We got a great response for our last data center in the US. We asked our customers which location they would like us to start next. UK and ANZ emerged as a preferred choice.

We are happy to announce our new device data center in Melbourne, Australia.

This means that you can now test your Apps on Australia specific Mobile devices with local Telco Networks such as Vodafone, Telstra and Optus. 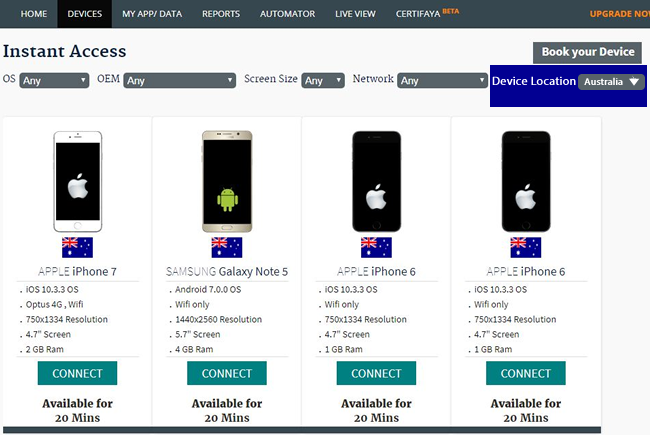 Continuing this journey, we will setup the UK Data center very soon.

Keep sending your suggestions and voices. We are listening!!!

May 22, 2017
Tips to Consider While Creating a World Class Mobile Testing Lab

pCloudy's Data Center   Ever had apps on your phone which suddenly crashed it and you couldn’t figure it out? In today’s age, If you have a smartphone that needs to get you through most of the day, be it…

How Does Facebook Test its Apps?   Using REAL mobile devices. You must be like “Noooo..., really?” with a sarcastic look on your face. Well, Facebook using real devices for testing is actually not surprising at all. But, what is…

A Sneak Peek of Our Device Data Center

Ever had apps on your phone which suddenly crashed it and you couldn’t figure it out?

In today’s age, If you have a smartphone that needs to get you through most of the day, be it work or play, you must have experienced frustrating bugs on that app that is either slowing down the phone or stops you from using it when you need the most. So you uninstall it and be done with it. Try asking any app developer or tester what it is like to test usability of the app in thousands of devices across screens, operating systems and the carriers.

This is where pCloudy comes-in. A one stop solution for Developers and Testers to certify their App across variety of devices.

How does pCloudy work?

pCloudy has found an incredibly simple way of allowing users to remotely test their apps on different real and physical devices by using just a modern web browser. Alternatively, users can access the devices directly from their IDEs like (Android + Eclipse studio). 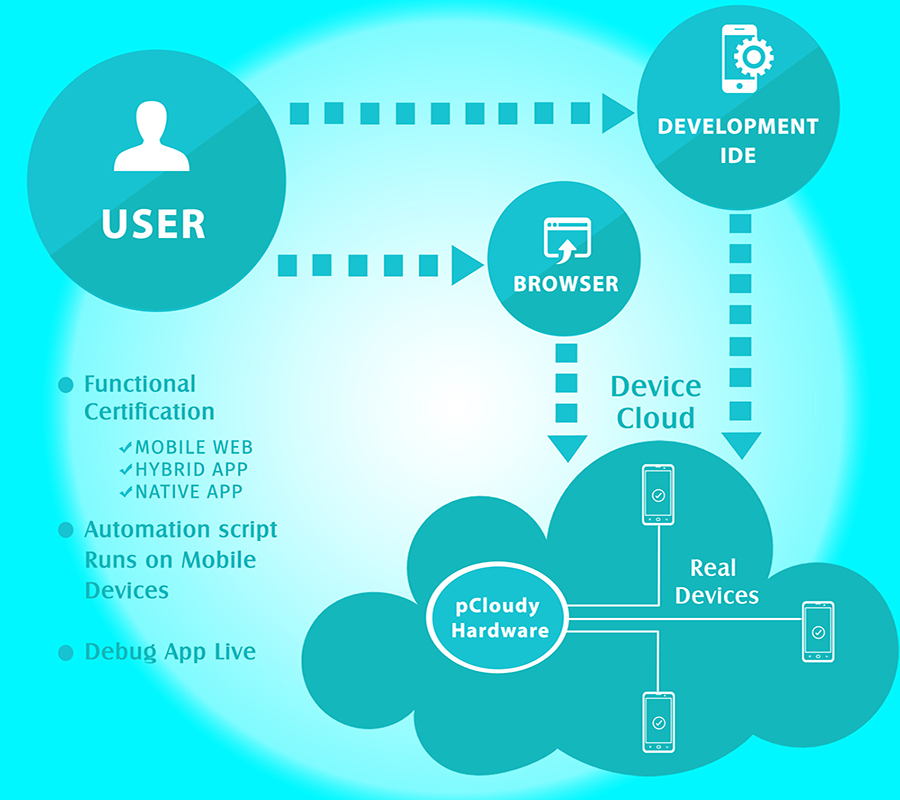 Use of Physical devices: Mobile App Testing is most effectively when done on a real physical device. That’s the reason, pCloudy currently has 500 + Android and iOS device (real device, no emulators) across various manufacturers and versions. 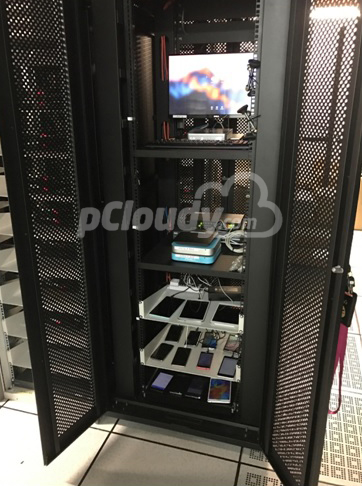 Kind of hardware involved: pCloudy has a customized hardware setup, which runs the software to allow communication with real mobile devices. All the mobile devices are connected to the hardware using USB cables. 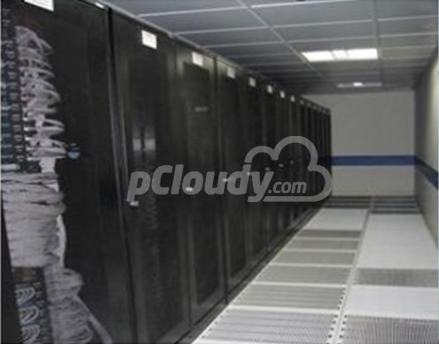 [Data Center: All the above is located in a secure, 24×7 operated data center]

When it comes to certification of Apps, one of the biggest concern for Users while using a solution like pCloudy is security and safety of their Data.

Why we decided Data Security was Critical?

It was important for our customers to feel safe about their Apps and data that they upload on pCloudy servers. Many a time these are not-yet-released app and related data. Today pCloudy is working with Global enterprises who are extremely concerned about safety of their Data.

Security of Data Center: A major component of the entire pCloudy offering is the data centers where physical mobile devices are connected. These devices are then made accessible through cloud via the web browser to the customers. pCloudy has hosted their cloud in a data center which meets all the global standards, including compliance with SSAE­16 (SOC­2) and ISO 270001 standard. pCloudy has 99.982% uptime commitment on the DC infrastructure which is measured quarterly, a failover redundancy mode for equipment’s setup and everything that does not get in the way of a creating an uninterruptible, stable working mobile network environment for the apps, round the clock, 24X7.

Secured Cloud Drive: Data uploaded by user (Apps/Test Data) is Stored in secured folder on our server in DC. User space is protected by username and password. Data is further protected by a layer of encryption. No access to user data by pCloudy admin.

Device Clean up: Device gets cleaned up automatically after each use. As soon user releases a device, user installed Apps get uninstalled, data uploaded get deleted and device gets powered cycle.

May 2, 2019
Mobile Responsive Testing and Debugging on Real Devices

You must be like “Noooo…, really?” with a sarcastic look on your face.

Well, Facebook using real devices for testing is actually not surprising at all. But, what is really surprising is that there are several mobile app development companies who still do NOT use real devices for testing. Isn’t it enough to test mobile applications on simulators or emulators? Definitely No! If it were, then Facebook would not have invested on its expansive state-of-the-art Mobile Device Lab in Prineville, OR.

Facebook’s journey to the data centre started off with their first setup – The Sled model. The Sled model had drawbacks like inconsistent Wi-Fi connectivity which led them to build the second version named – The Gondola. The Gondola had a lot of issues with tangled USB Cables so they built – The Slatwall. The Slatwall took up an entire room, and we were able to deploy 240 devices, but to accommodate 2,000 phones they need to scale to nine of these rooms, this wouldn’t work. So they decided to move the mobile device lab into a data centre in Oregon.

Currently, the lab in Oregon hosts 60 custom-built racks, each of which holds 32 devices. Four Linux-based OCP Leopard servers are used to test Android apps, while eight Mac Minis are used for iOS apps. Each OCP Leopard server is connected to eight Android devices, and each Mac Mini is connected to four iPhones. Almost 2,000 devices can be run simultaneously for testing new iOS and Android versions of Facebook, Instagram, Messenger and Whatsapp. Each rack also has its own Wi-Fi signal and an EMI enclosure to keep the Wi-Fi local to its rack, according to a post by Facebook developer Antoine Reversat. This not just ensures that Facebook apps functions properly on new and old devices, but also in various network conditions.

Facebook has a growing 1.6 billion users worldwide. There are tens of thousands of different mobile devices in the market, and Facebook wants its apps to run seamlessly on all of them. Taking into account the variation in hardware, mobile operating system, aspect ratios, and network condition of these mobile devices is an increasingly complex operation.

Additionally, the developers at Facebook make thousands of code changes every week on each mobile platform. This means they also need to be aware of the performance implications of a code change on both high-end and typical devices, as well as on a variety of operating systems. “Given the code intricacies of the Facebook app, we could inadvertently introduce regressions that take up more data, memory or battery usage”, writes Reversat in a blog post. It is crucial to ensure new versions of Facebook’s apps don’t crash or run into performance problems when engineers make updates.

The Rack based Mobile Device Lab is a system built to maintain and improve the development speed while minimising the number of regressions in dimensions of performance, such as speed, data usage, battery consumption, and memory footprint. “In practice, performance issues can be detected in either a lab environment or the real world. Both environments have pros and cons. In the lab, it is difficult to build a controlled environment to reasonably mimic the real world, so catching most perf issues and predicting perf wins before they make it out into the wild is harder. Data that’s gathered in the real world is truer than data gathered in the lab, but the signals can be very noisy. This can make it more difficult to fix a problem or more difficult to figure out the root cause of an issue. It is also less desirable because it requires data collection from user devices. We have worked hard on building tools for lab environments with a belief that such a system can catch most issues, if not all of them, and provide a significant benefit.” writes Zheng Mi, an Engineering Manager at Facebook

The lab is also integrated with configuration management tool named “Chef”, developed by Facebook to deal with the management of hundreds of thousands of servers is used to monitor and maintain a consistent device state during the tests.

The lab also houses the social network’s one of the most ambitious artificial intelligence projects: the Big Sur. It is Facebook’s most advanced Open Rack-compatible hardware specifically designed for AI computing at large scale. Leveraging NVIDIA’s Tesla Accelerated Computing Platform, Big Sur is twice as fast as its previous generation, which means you can train twice as fast and explore networks twice as large.

When Facebook can assemble its own fleet of devices for testing purposes, why can’t you? Want to own a mobile device lab like Facebook’s? pCloudy can help you.

September 11, 2018
Moving Beyond Traditional App Testing with AI and DevOps

App Testing with AI and DevOps   Are we not living in an amazing time? Technologically advanced, digitally sound!   We thrive on all things digital. The world around us is becoming all digital with limitless possibilities. Today as a…