Web applications are software applications that can be accessed through a web browser such as Google Chrome, Safari, Mozilla Firefox, UC Browser, MS Edge, and others. Most times they are stored on a web server. The developers use HTML, CSS, JavaScript, and other programming languages to create web apps. Optimized Web applications can be used on various devices with active internet connections, including PCs, laptops, mobile phones, and tablets.

Here is a helpful poster that highlights the Types of Applications

Here is a helpful poster that highlights the Types of Applications

In a nutshell, the basic difference between mobile and web app testing looks something like this: 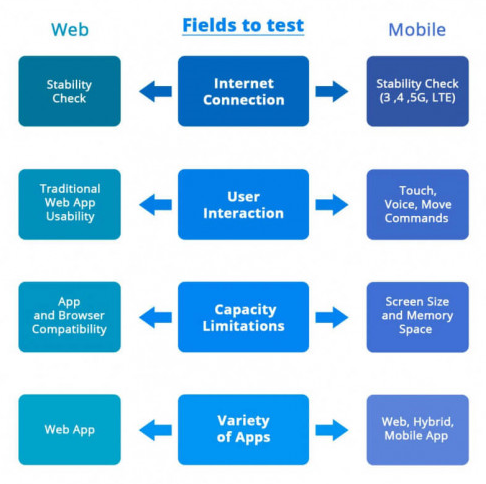 1. Distinguishing between web and mobile apps:

2. Technical Challenges: Web and mobile app development is different in terms of usage and dealing with different device types. Here are a few areas based on which web and mobile testing are differentiated:

As previously stated, to keep a competitive edge in the market, it is critical to work on both web and mobile applications in this continuously expanding technological environment. For creating a well-functioning app with a great user experience, businesses must guarantee that both mobile and web application testing are given equal weightage. Also instead of physical device labs, laptop or mobile device lab on cloud must be considered as cloud based testing platforms offer multiple benefits.

The choice between a Web application and a mobile application is entirely dependent on the business needs, but having both offers you the added assurance of reaching a larger audience.

[xyz-ihs snippet=”quickLinks-Appium”]   Appium is an open source mobile app UI testing framework. You can test all types of mobile apps and perform automation test on physical devices as well as on emulators and simulators. Appium mobile testing does not have a dependency on mobile device OS and it supports cross-platform app testing as a […]